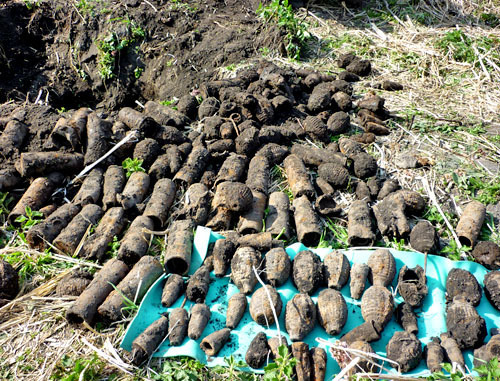 On April 22, the local ethnographic expedition "Native Landscape", headed by Victor Kotlyarov and Maria Kotlyarova, found a hideout with a large number of grenades and shells of the Russian Civil War in the Kabardino-Balkarian Republic (KBR).

Victor Kotlyarov has explained that the hideout was found near the village of Zayukovo, on the right-hand bank of the Baksan River, on an abandoned rural road.

"Earlier, we repeatedly heard from local residents that in 1918 somewhere in the upper reach of the river a transport with weapons was lost. Specifically, the 92-year-old Aslamurza Gedgafov told us about it. According to his story, when the squad of Nazir Katkhanov, one of the organizers of the struggle of highlanders for Soviet power in Northern Caucasus, entered Zayukovo, the "whites" had to hurriedly leave the village. They had plenty of armaments, but few carts and horses; therefore, it is possible that they hid part of the weapons near the village," Victor told the "Caucasian Knot" correspondent.

According to his story, the shells and grenades are no longer of any threat. The gunpowder in them was dampened and turned into dust.

As noted by Sergey Plotnikov, a senior fellow worker of the Fund of Weapons and Equipment of the Central Museum of the Armed Forces of the Russian Federation, near Zayukovo there are several other hideouts. The local researchers still have to learn what is hidden in them.